Dulhan DramaDulhan is a Pakistani drama serial which is aired on Hum TV. This drama has the best cast of Pakistan. The main role in Dulhan drama is played by Sami Khan and Sumbal Iqbal. This drama is full of excitement and emotion. The story of this drama revolves around an unfortunate girl. There is an incident that changes his life completely.
The best performance of the cast plays a very important role in the popularity of the drama.
The cast, story, and other details of this drama are provided below. 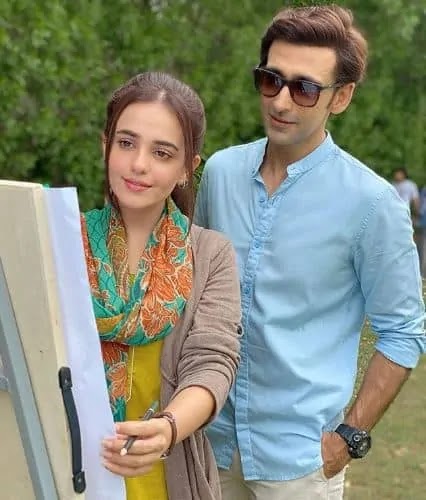 Watch every Monday at 8 pm on HUM TV

The story of the Dulhan drama revolves around a girl who belongs to a middle-class family. The girl’s name is Amal [Sumbul Iqbal]. She lives in her house with her father, stepmother, and stepsister.
She is a university student and works in a boutique in the evenings.

A boy named Meekal [Sami Khan] falls in love with Amal at first sight. He somehow persuades his father to marry Amal. On the night of the wedding, Amal finds out that Meekal has no love for her. Yes, he has married Amal only because of a condition imposed on his friend Shahmeer [Faizan Khawaja], while he is already engaged to Mashal Khan.

All this is due to the fact that some time ago Shahmeer offered Amal to be his girlfriend in university but Amal refuses.
When Amal refuses, Shahmeer grabs Amal’s hand and threatens her if If he refuses to befriend her, it will not be good for him. Amal slaps him in front of the entire university.

He uses his friend Meekal to befriend Amal. Meekal burns his and Amal’s marriage certificate and leaves Amal with Shahmeer.
When Amal finds out about this bitter truth, she is shocked. Now Amal has no proof that she is married to Meekal because Meekal had burned the marriage certificate.
After that, Amal faces many difficulties in her life. Meekal doesn’t even care about his armor.
Meekal marries his girlfriend Mashal Khan but he is not happy with her because of his actions.

We Hope You Like To Know About Pakistani Drama & Shobiz Industry Information So Please Vist Our Site Homepage.

Other Articles You Must See :